You are here: Home > Latest News > Charlie and the Chocolate Factory Trip 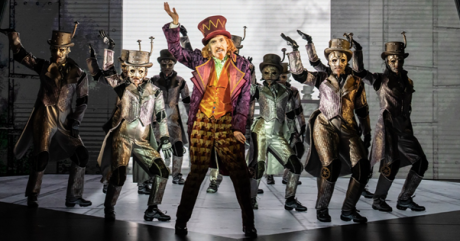 There are four young actors who play the lead role of Charlie at different performances. Noah Walton played Charlie at our performance and he was excellent, creating the character flawlessly and really making us care about and warm to him. All of the performances were outstanding from the actors who played each of the other children to those playing Charlie’s family, and the actor playing Willy Wonka. The ensemble worked well together to create images and supporting characters but it was their performance as the Oompah Loompahs that was particularly impressive. The characters were modernised to become robots who cleaned up after each of the unfortunate disasters.

Design was key to the success of this performance with set pieces such as the Bucket’s home being wheeled on and off and the fabulous use of lighting and costume. The projections were highly sophisticated as they were used to create locations which the actors were able to interact with and seemingly change. The use of projection to create the sense that the children were travelling in a lift going up, or on a boat on the chocolate river were particularly awe-inspiring.

Overall, this was a fabulous production which we would recommend seeing.

Here are some thoughts from students who watched the performance:

I had a great time watching this production. The actors were incredible, and the design was amazing and gave me lots of inspiration for design and performance that I might use in my Drama lessons! Overall, it was a fantastic experience. (Alice A Y12)

The play was excellent. I liked the part when the TV news came on and that the news presenter was on the stage and also on the mini tv’s around the set. I also liked when Mike TV was in the transporting wardrobe and was transferred onto the TV. When he eventually came out, he was a tiny puppet trying to boss his mother about, but she said that she would look after him like when he was a baby. The other thing I liked about Charlie and the Chocolate Factory was when Augustus Gloop was being sucked up in the pipe and that he was covered in chocolate. (Tamsin H Y10)