Putting your trust into the wrong people? I think we can all relate to that. Fortunately for us, our stories don’t often end as dramatically as the story of Othello. Full of jealousy, misplaced anger and betrayal, this Shakespeare play has captivated audiences from across the world with its entertaining way of exposing the paranoia and fear hidden in relationships.

Not long after the secret marriage of Othello and Desdemona is revealed, lies are told and a greater plot is put into play. As Iago introduces the first seed of doubt into Othello’s mind, we see how untrusting humanity really is. Rather than facing Desdemona directly, Othello sets out on a fantastical revenge plan to uncover her alleged affair with Cassio, while Iago does everything in his power to manipulate his thoughts and opinions, going so far as to plant a handkerchief in Cassio’s pocket as “evidence” of Desdemona’s unfaithfulness. When emotions rise and the levels of jealousy become madness, the death begins. First goes Desdemona, smothered by her own husband. Next is Emilia, killed by Iago, moments before his attempt to flee. Finally, is Othello himself as, overwhelmed with guilt, he takes his own life in a last action of regret.

The story of Othello has been adapted to many plays through the years, but Frantic Assembly has brought it to a whole new level with their precise choreography and modernised version. The director’s call to make the performance a mix of naturalism and physical theatre highlighted specific moments throughout the play and brought our attention to the most important elements. This, along with the carefully thought-out lighting, complemented the plot and all the characters' emotions incredibly well. But the design elements themselves are not enough to make up the full play, it still needs to be backed up by the acting and, in the case of Frantic Assembly, it was all there. All the rehearsals and run throughs really paid off, making the final piece as well organised as it was. From the actors’ movement sequences to the facial expressions and tone of voice, everything added to the atmosphere of each and every one of the scenes, not only through technical aspects but also through the fantastic use of spacing, utilising the whole set from the pool table to the couch to add to the plot.

Quotes from other students about the performance: 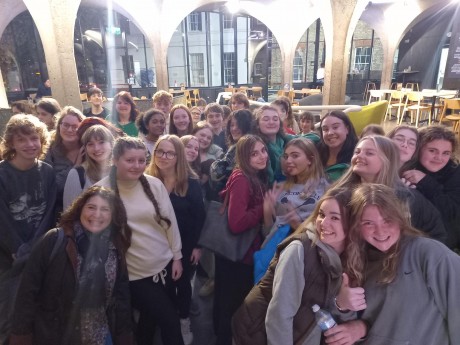 "I loved a lot of the movement sequences and direction in the play. I also thought that the modern setting with props, outfits and set made it quite interesting."

"I loved the director's twist on the Play: a Shakespearean play being set in the modern society and the characters being modern day ‘chavs’. Also, the use of the round by through sequences told the story really clearly and were extremely well executed."

"I thought that this modern adaptation of Othello was a fantastic performance with the same themes of the original performance whiles applying it to a modern setting that the audience will understand. The movement sequences were fantastic and varied and all the actors did amazing jobs in vocalising and physically exploring these roles."