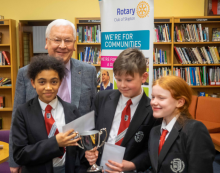 Teams comprised a Chairperson, a Proposer and an Opposer, who had to make their pitch in 15 minutes before a panel of three judges, headed by Elaine Davies from the Craven Speaker's Club.  A Questioner asked one question but there were many from the floor.

The subjects, chosen by the competitors at Senior level were:

Giggleswick: 'Language endangerment. What are it's causes and how can we stop it?

Ermysted's 1st team: “It is better to plant a cabbage than a rose”

The subjects, chosen by the competitors at the Intermediate level were:

Judge's comments have been passed on to the schools as there were so many questions which meant that time ran over. They felt that there were good quality presentations with a lot of information provided that showed a high level of research and knowledge of the varying topics.

The winning senior team was Ermysted's team 3, and the best intermediate team was Ilkley B.

The best individual Speakers were Thomas Shaw of Ermysted's and Charlie Collinge of Ilkey.

It is hoped the winning teams will decide to advance to the next stage, under a slightly different format, at Leeds Trinity University, Brownberrie Lane, Horsforth LS18 5HD on March 28 at 13:00.